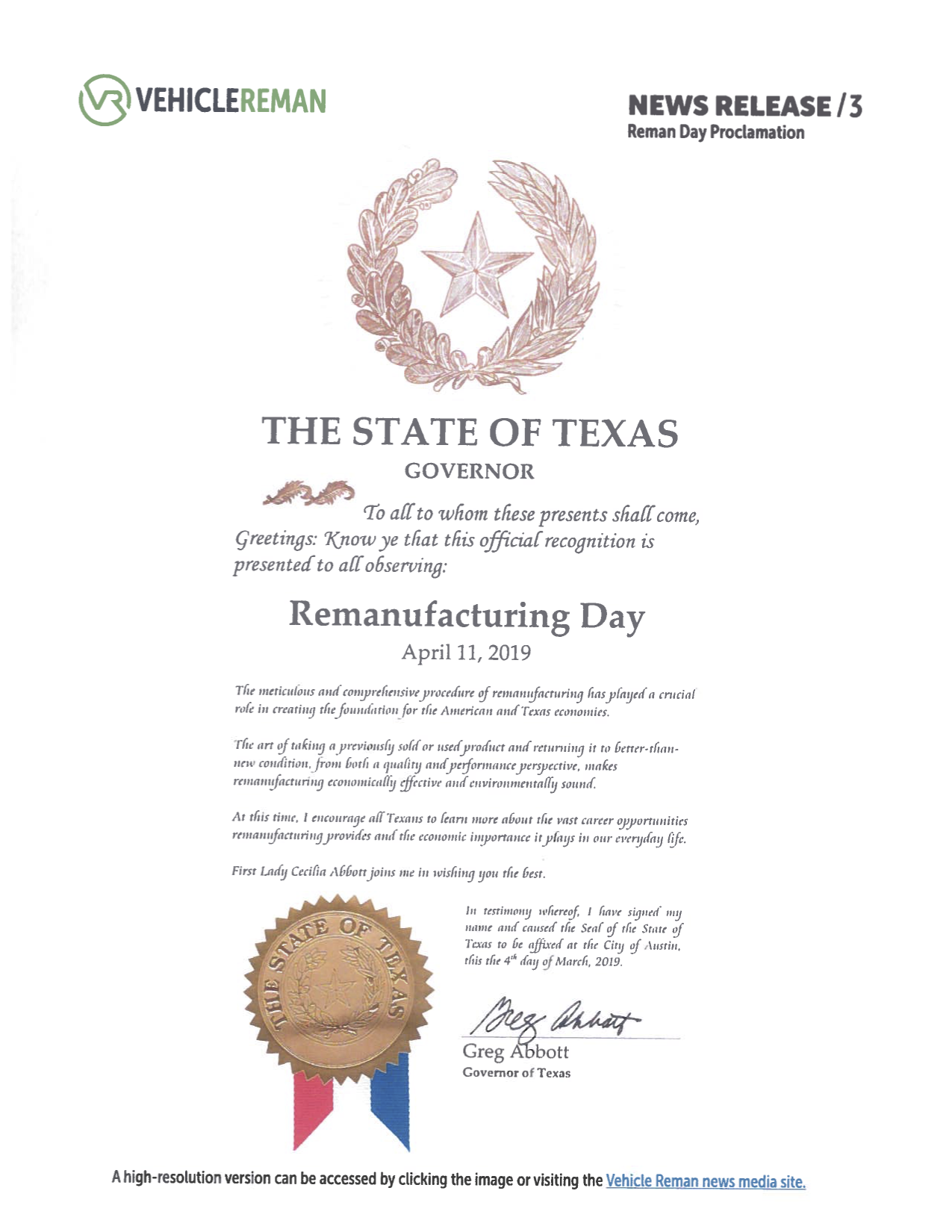 AUSTIN, Texas — Gov. Greg Abbott issued a proclamation to make April 11, 2019 Remanufacturing Day in the State of Texas. The statewide observance will coincide with Global Remanufacturing Day, which celebrates the growing economy for same-as-new remanufactured goods, from vehi- cles to office furniture to medical devices.

The governor issued the proclamation at the request of Vehicle Reman LLC of Tyler, Texas, the nation’s only company dedicated to remanufacturing Class 1-5 pickup trucks, vans, box trucks, SUVs and automobiles. “We’re grateful to Gov. Abbott for helping us communicate the importance of remanufacturing,” said Greig Latham, founder and CEO of Vehicle Reman. “It is another step in promoting the cost efficiency, reliability and environmental benefits of remanufactured products.”

Remanufacturing is a comprehensive and rigorous industrial process by which previously sold, leased, used, worn or non-functional products or parts are returned to like-new or better-than-new condition, from both a quality and performance perspective, through a controlled, reproducible and sustainable process. Remanufacturing has been recognized by leading universities, research institutions and manufacturers around the world as the highest form of recycling, reducing green- house gas emissions, saving energy and reclaiming end-of-life products.

Texas is home to many remanufacturing-focused companies that produce automotive compo- nents, vehicle engines, heavy construction equipment, lumber, compressors, steam turbines, computer hardware, golf equipment and more. Vehicle Reman provides its customers with same- as-new pickup trucks and other vehicles at half the cost of buying new. Reman gives fleet owners a valuable option for getting the most out of end-of-life vehicles.

“This is a natural evolution of well-established automotive parts remanufacturing, but applied to the whole vehicle,” Latham said. “We have a proven system that remanufactures a truck, van or other vehicle back to original specifications. When customers see the same-as-new quality and remarkable savings, reman really sells itself. The main challenge for us is many fleet buyers don’t yet know about reman and what it can do.”

A typical vehicle reman candidate is a truck, SUV, van or automobile with at least 100,000 miles and seven years in service. Vehicles up to 20 years old can undergo remanufacturing. Vehicle Re- man specializes in Ford, GM and Chrysler brand vehicles. Reman vehicles are quieter, ride more smoothly and will usually achieve much better fuel economy than the pre-reman units.

The first global Reman Day was celebrated in April 2018 as a way to highlight the value of reman- ufactured products. Reman goods are virtually indistinguishable from similar new goods. Reman- ufacturing saves, on average, 85 percent of energy use, 86 percent of water use and 85 percent of material use compared to new products. Remanufacturing supports 180,000 full-time jobs in the United States and produces more than $100 billion worth of goods each year.